Sculptured arts were instrumental in the restoration of the Queen Victoria memorial at Buckingham palace. This world famous monument situated in the center of the queens gardens at the front of Buckingham palace, is the largest in England, and the restoration needed to be completed in time for the queens jubilee celebrations and the Olympic games, of which this monument and location played a major role.

Designed by the architect Sir Aston Webb, who also designed the front facade of Buckingham palace, his design was to be the setting for sculptor Thomas Brock’s monument in 1902. Sir Thomas Brock`s sculpture stands 25 meters high (82 feet) and is sculpted from 2,300 tons of Carara marble, and it took him a decade to complete the sculpture. The Victoria Memorial, also know to Londoner`s as the wedding cake, pays homage to Queen Victoria, who reigned from 1837 until her death in 1901, and was unveiled by King George V and his first cousin Wilhelm II of Germany, Victoria`s two senior grandsons, on May 16, 1911. King George V was so happy with the monument he Knighted Thomas Brock on the spot.

Sculptured arts expertise was called upon, and were given the project to repair and replace missing or damaged parts of the sculpture.
Our main task was to re-carve the missing `George and the dragon orb` held in Victoria`s left hand, which had been broken off and stolen, along with her nose, fingers and cross from her crown some years ago. Replacing the George and dragon orb was very difficult, as no documentation on it could be found, apart from an old grainy black and white photograph.

Our first major job was to take the moulds, on site, of the areas of the missing parts, we then took zero shrinkage casts from these moulds to set up the base for the re-placement carving`s.

We then had to make the plaster maquette models, which were then presented by ourselves to the Royal parks and gardens architects, palace officials, along with representatives and experts of English heritage.

Sculptured arts then set about re-carving the parts from Carara marble, which had been inspected and passed for use on the monument, and when finished we re-attached them on site and blended them in to the rest of the monument. The guilders re-guilded the the top pinnacle statue of Victory, courage and constancy, which took three weeks to complete and many thousands of gold leaf sheets.

It was really rewarding to see the finished project once the scaffolding had been removed, but even more rewarding to hear that the Royal family were very pleased with the work and restoration, by all concerned, on this priceless national monument. 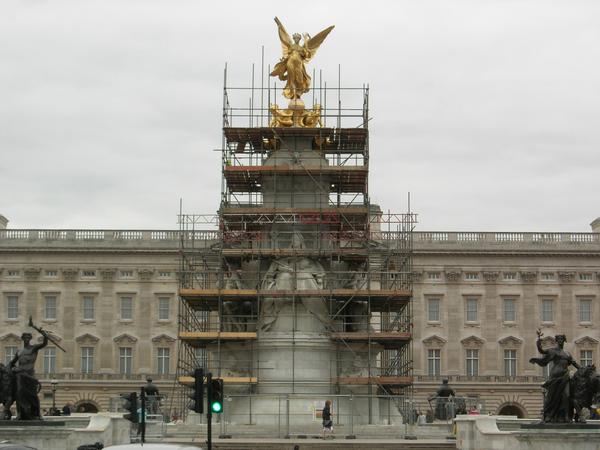 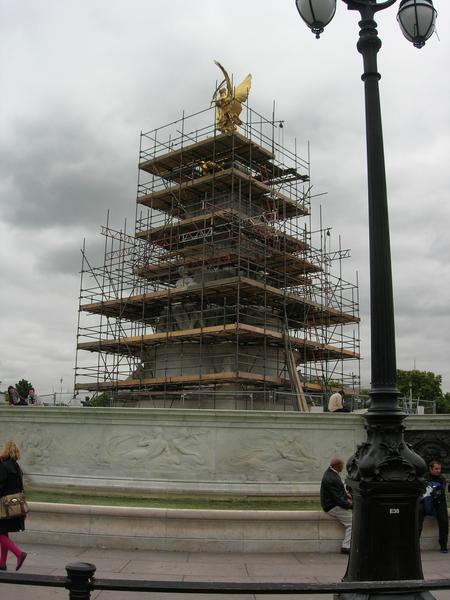 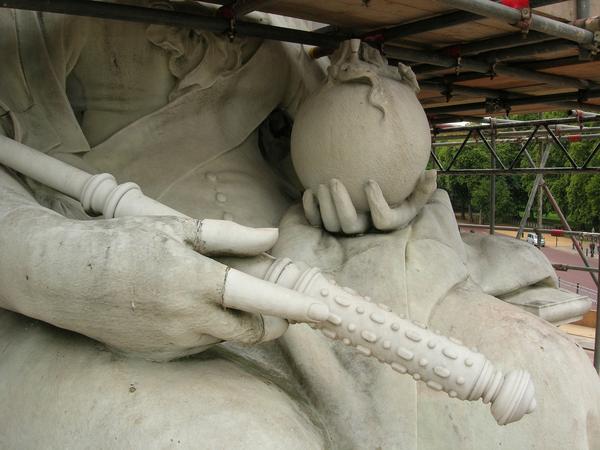 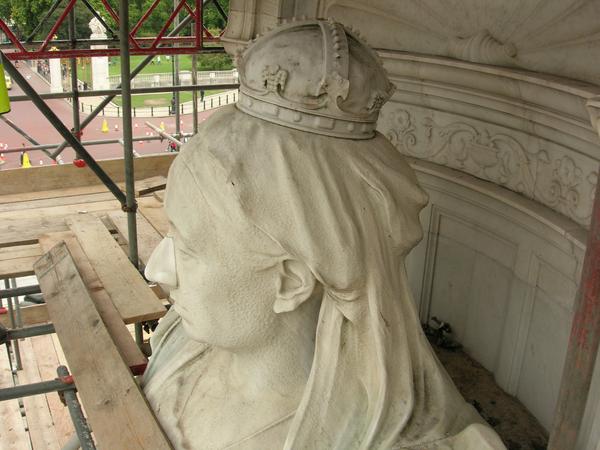 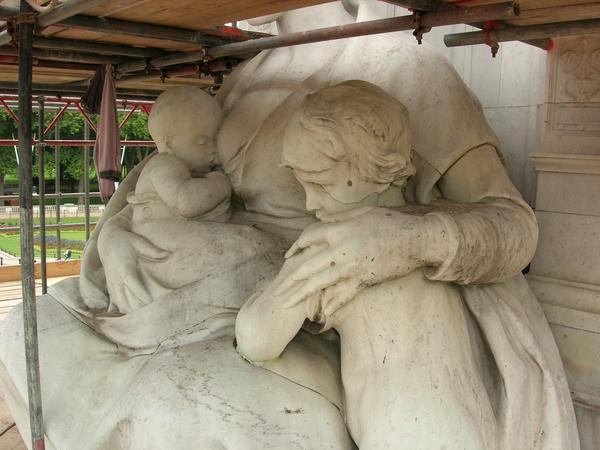 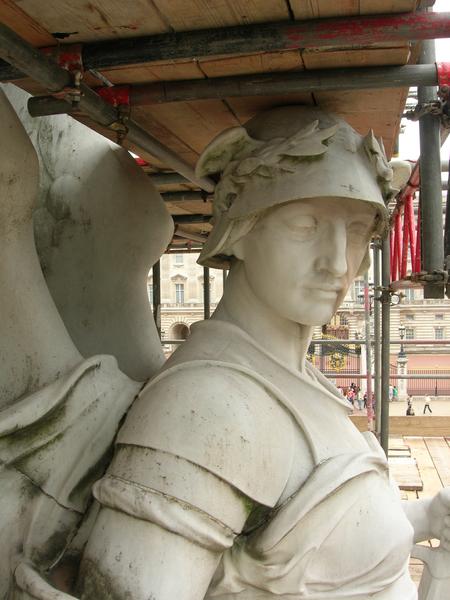 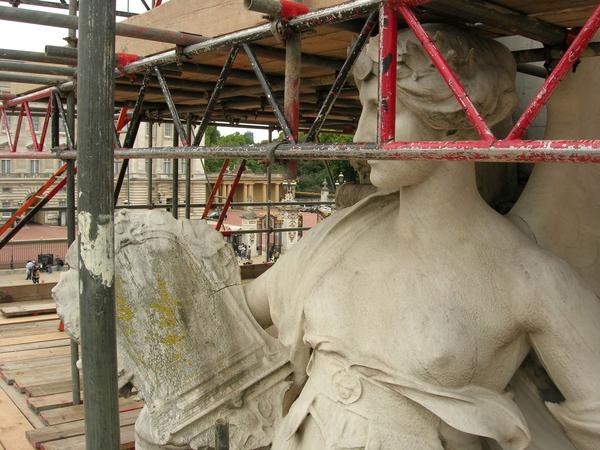 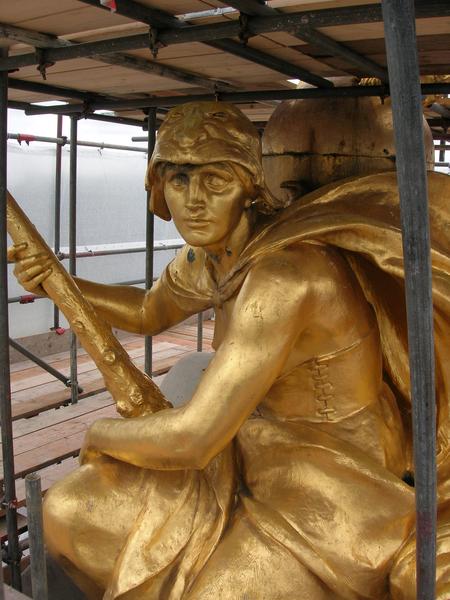 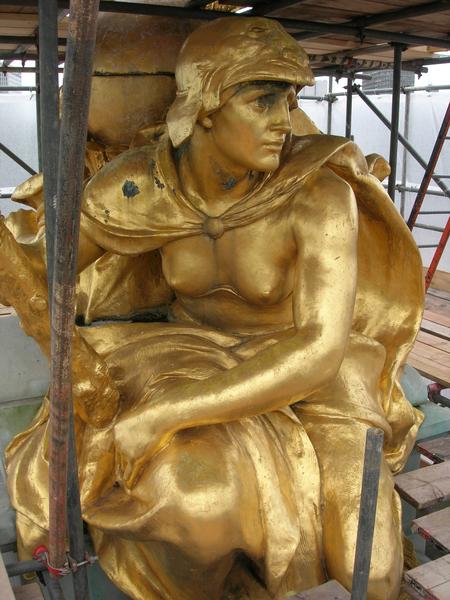 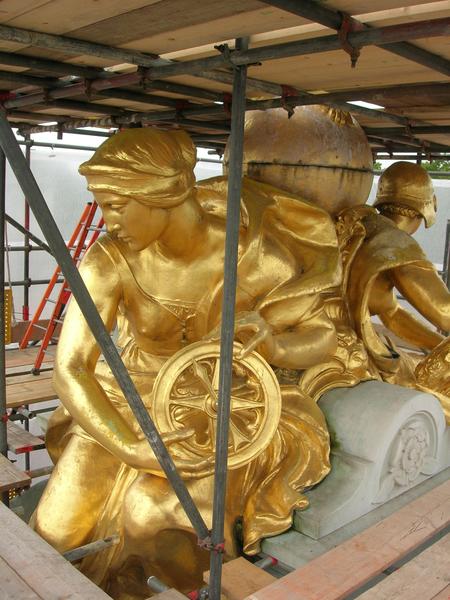 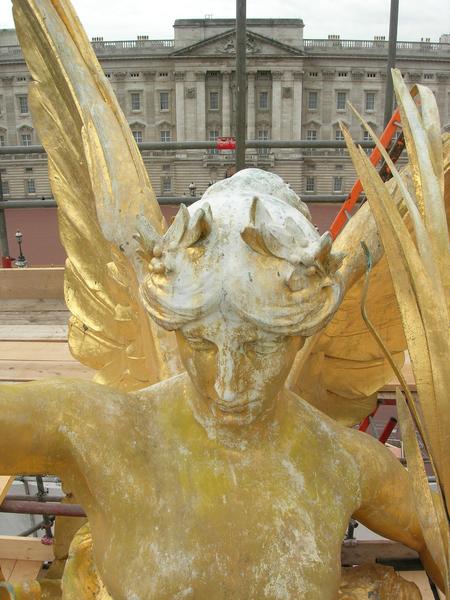 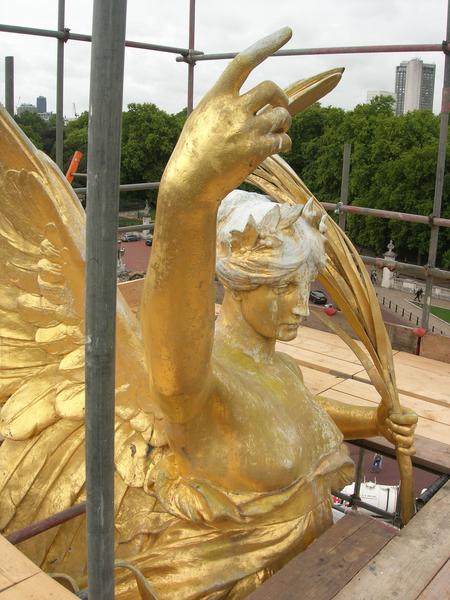 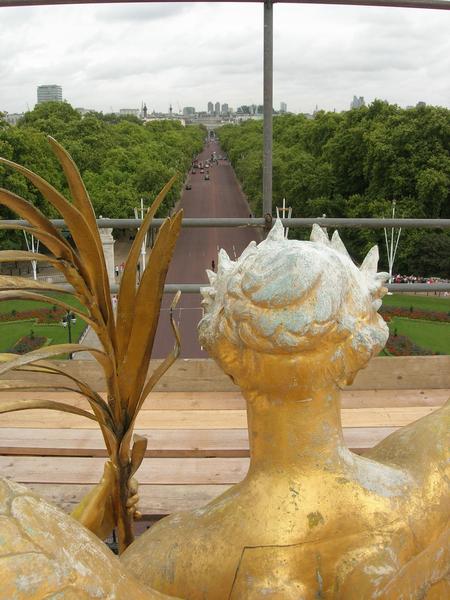 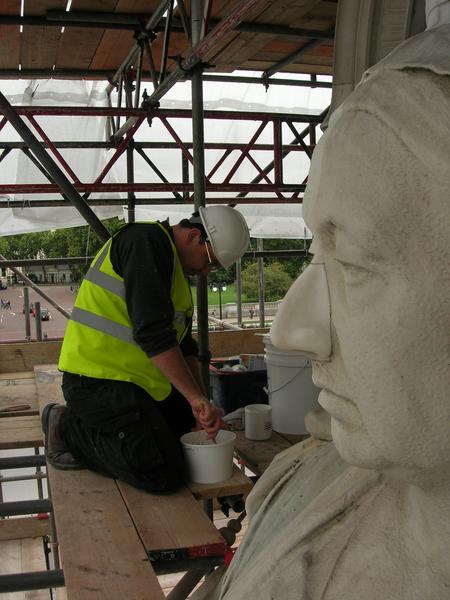 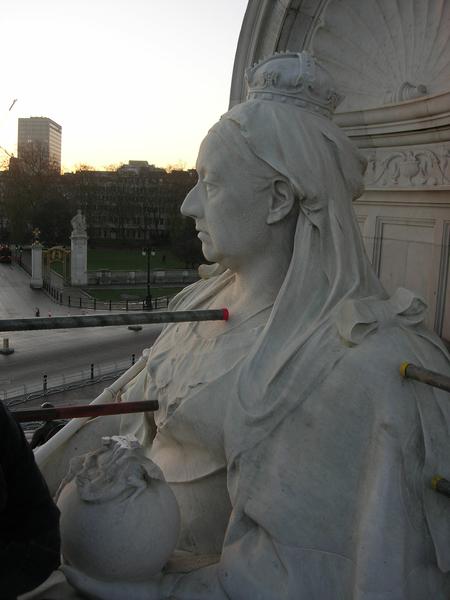 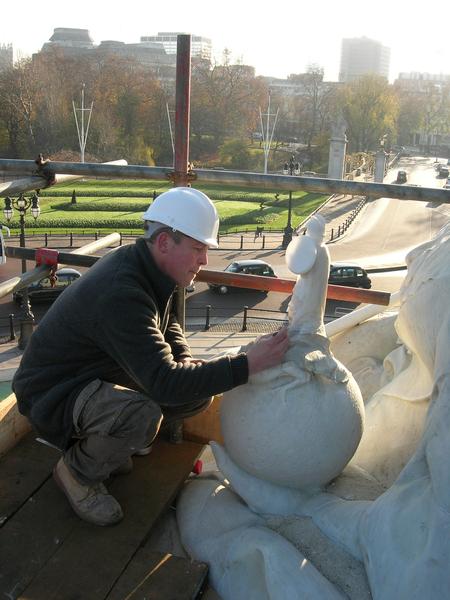 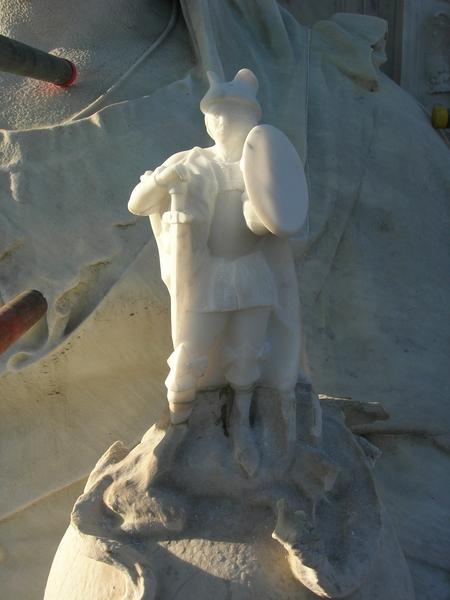 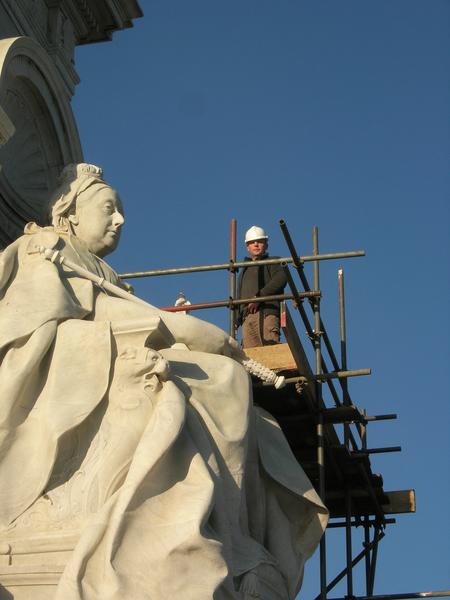 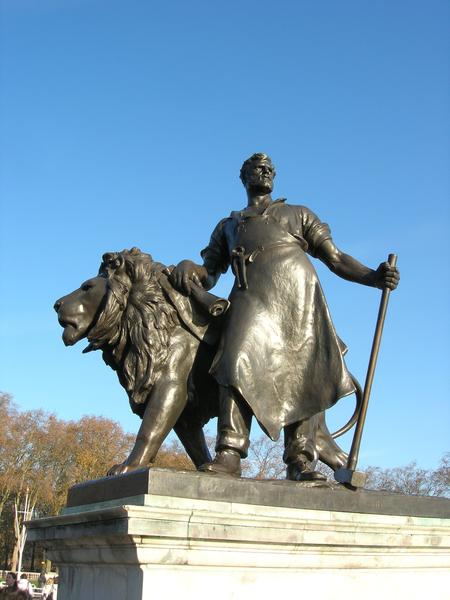 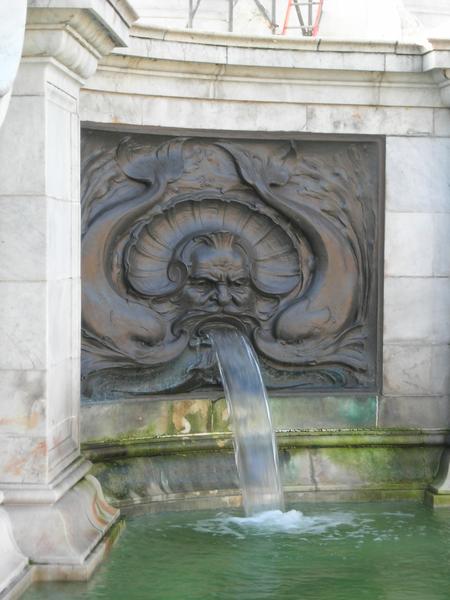 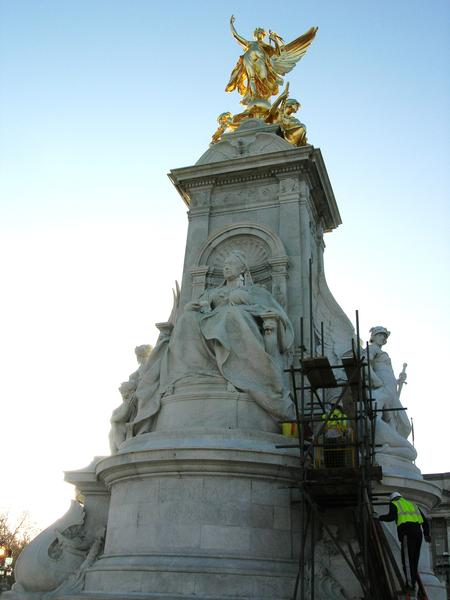 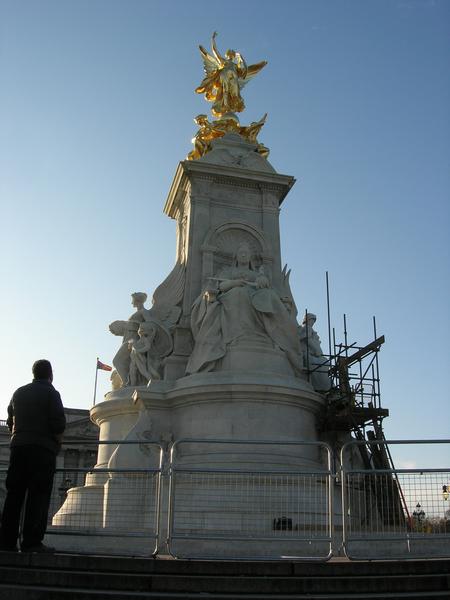 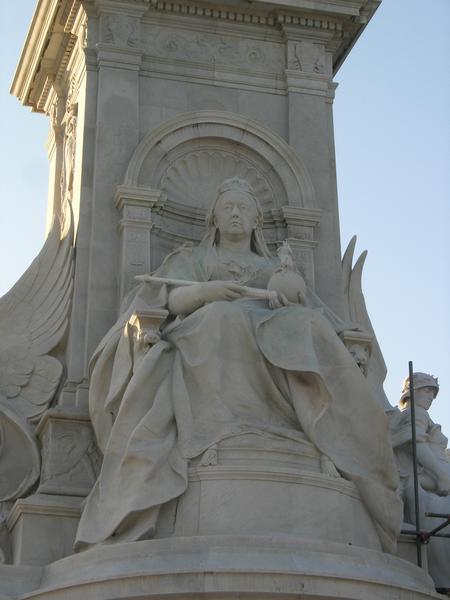 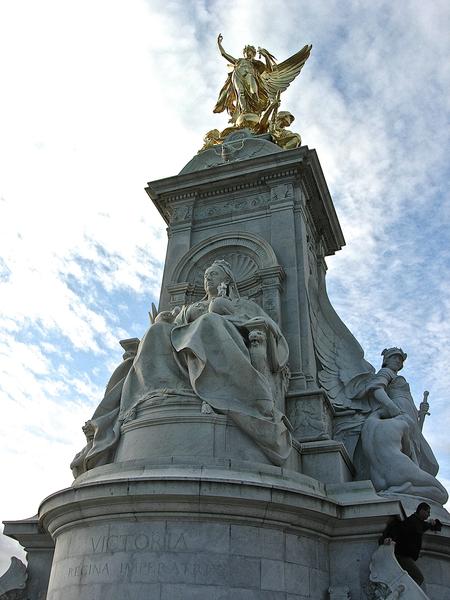 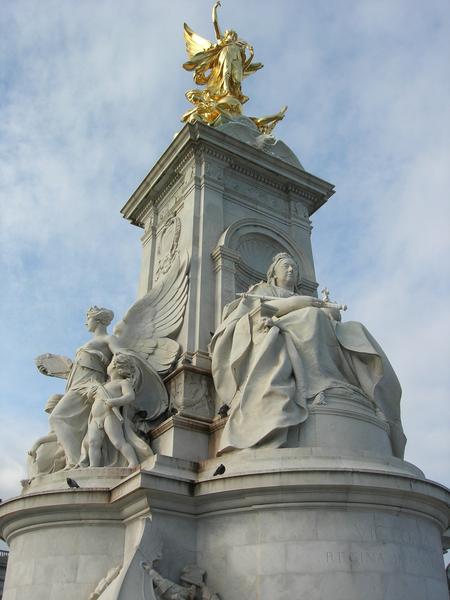